They all go on a camp to mark the end of the Academy days, and overall I think the episode was pretty cool. But, what really caught my attention was the fact that Sumire Kakei was able to perform a Jutsu unique to her. We all know that during the Nue arc, Sumire was the antagonist. She basically summoned the Nue in Konoha back then. However, in the end, the gate to the Nue was shattered.

But, in the recent Boruto episode, Sumire was able to reopen that gate, and use the Summoning Jutsu to recall Nue. That’s right! Sumire can use one of the most powerful Jutsu in existence. However, there is a catch. The Nue she summoned was extremely small in size, which I guess is mainly because it lacks chakra. The Nue basically absorbs chakra to get stronger and stronger. That’s what it did when we first saw it, and that’s why Naruto didn’t attack it head on.

But, even though it looks small, what’s amazing is the fact that Sumire is actually able to summon it. We all know that she’ll grow up to be a fine shinobi, so by the end of the series, or maybe even midway through it, Sumire will have an OP summon at her aid. I originally thought that the Nue would be Boruto’s summon, but that’s not clear yet. I’m not sure if that’ll be the case in the future, but let’s see what happens. As of now, it looks like Sumire just got stronger than before.

Did you watch the latest Boruto Episode? What did you think of Sumire and the Summoning of the Nue? Let me know your thoughts in the comments section below. 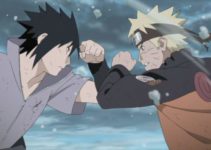