Masashi Kishimoto may be busy these days with a new series, but the creator of Naruto is not leaving the ninja world behind. Recently, the artist confirmed he was working on new characters for Boruto, and fans can get a look at one of Kishimoto’s new villains.

Tokyo saw Jump Festa invade it last weekend, and the annual convention made some big announcements. Franchises like Dragon Ball and One Piece dominated the event, but Boruto held its own. It was there reports confirmed Kishimoto created a brand-new villain for Boruto’s upcoming ‘Chunin Exam’ arc, and a first-look was also released.

As you can see below, the character hails from a familiar family. Urashiki Ootsutsuki is the latest baddie to come from the intergalactic clan, and he will team up with the baddies seen in Boruto: Naruto the Movie.

So far, the sketches of Urashiki look sleek and primal. The character has short hair that is pulled back, and he wears traditional clothes like Momoshiki does. As for his weaponry, Urashiki appears to wield a bendable whip which can fish for chakra.

The preview sketches which Kishimoto give fans a bit of information about the strange new villain. The artist left notes confirming that Urashiki wears a horned headpiece, uses a chakra needle which he can thread with chakra. However, the strings only last for a certain amount of time. Kishimoto also noted that Urashiki’s chakra rod can be used for ninjutsu and as a weapon itself since it bends like a whip.

The next arc is going to be fun! 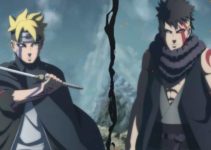