When it comes to Boruto, it seems like anything is possible. The series acts as a sequel to Naruto, but fans of Masashi Kishimoto’s first franchise are not always ready for what Boruto has in store. So, it is very safe to say otakus were not expecting the new series to bring in lightsabers to the Naruto universe.

No, really. Chakra Lightsabers are a real thing now.

In the latest chapter of Boruto, fans read on as the titular hero visited Konoha’s research center for scientific jutsu. Boruto was apprehensive at first thanks to his past run-ins with the organization’s technology, but all those thoughts went out the window when Boruto was tossed a lightsaber.

Katasuke Tono, a head researcher for Konoha, was seen tossing a sword hilt towards Boruto. “You hold it like this,” the ninja said. “While pressing the white button with your thumb, use your index finger to press the trigger. It’s dangerous, so be careful with it.”

Naturally, Boruto activates the saber right away, and even Luke Skywalker would be proud of how the ninja handles himself. A massive blade of chakra can be seen sprouting from the hilt, and Katasuke explains the tech uses chakra to form its blade.

As you might have expected, Boruto does fall in love with the weapon, but the ninja is not advanced enough to use it just yet. The researcher explains the pseudo-lightsaber has too high of a chakra consumption rate for Boruto to wield.

There’s no telling if the sword will make a comeback in Boruto, but fans have their hopes. After all, the anime has already shown fans that Boruto becomes a sword user when he is older. If the Uzumaki has chakra stores half as deep as his father, then Boruto may just be able to use the Chakra Lightsaber by the time he becomes a Chunin or Jonin. 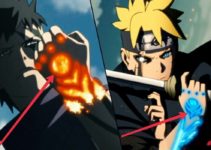 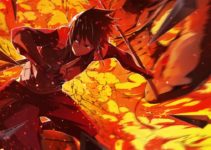